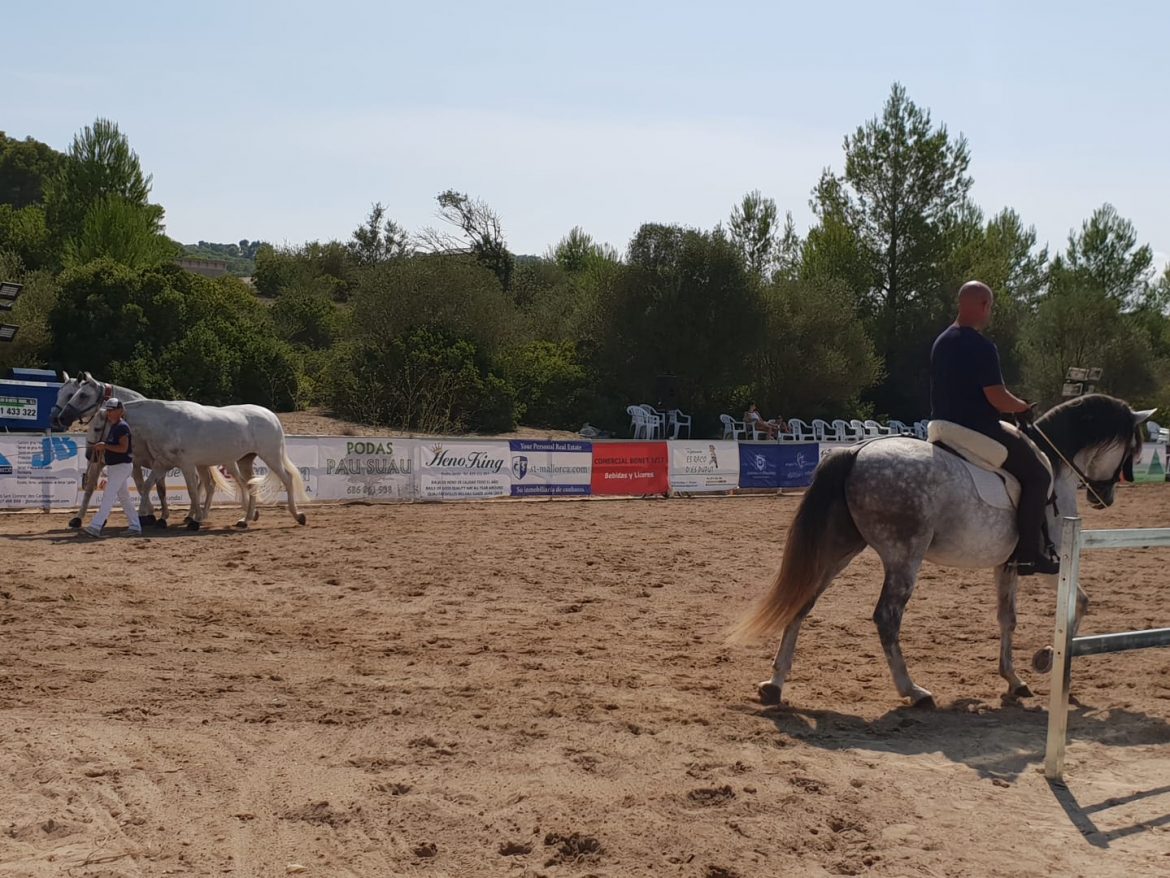 Day of the tourist yesterday, great night of music and enjoyment 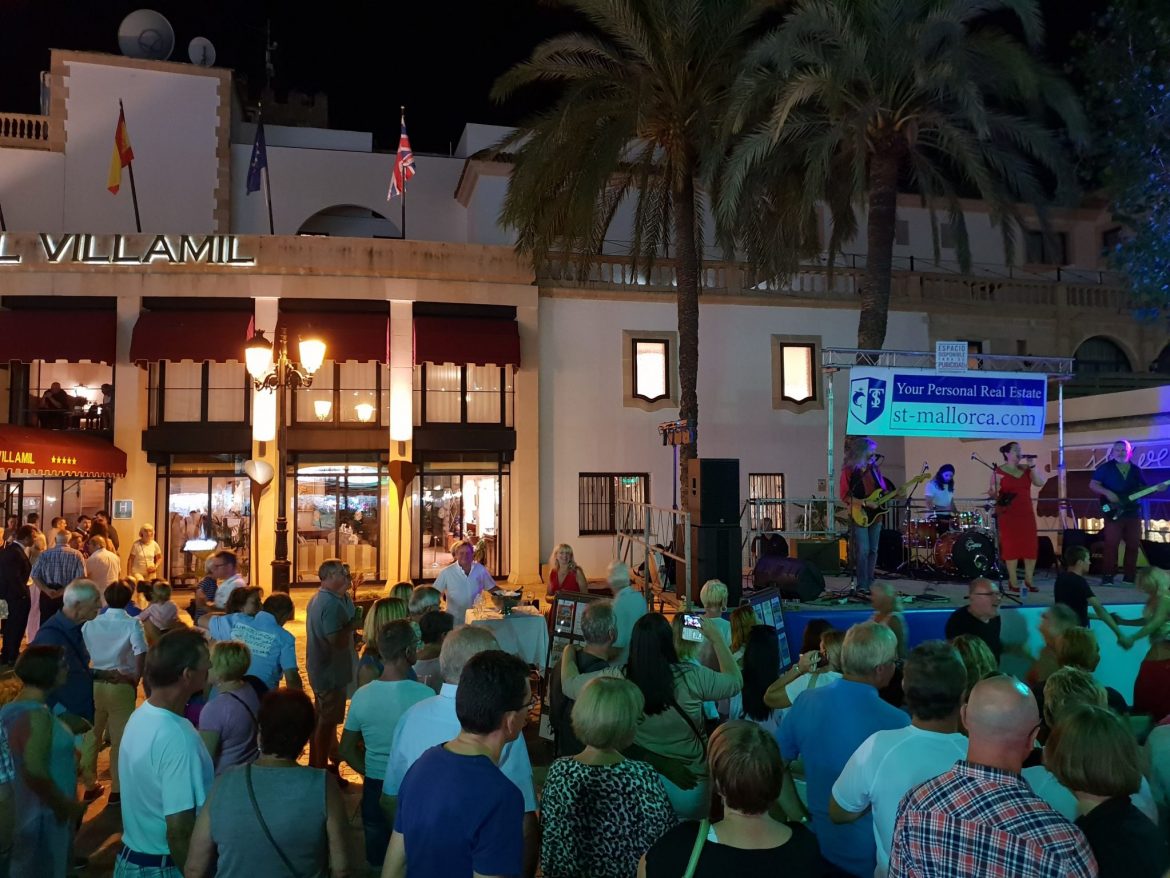 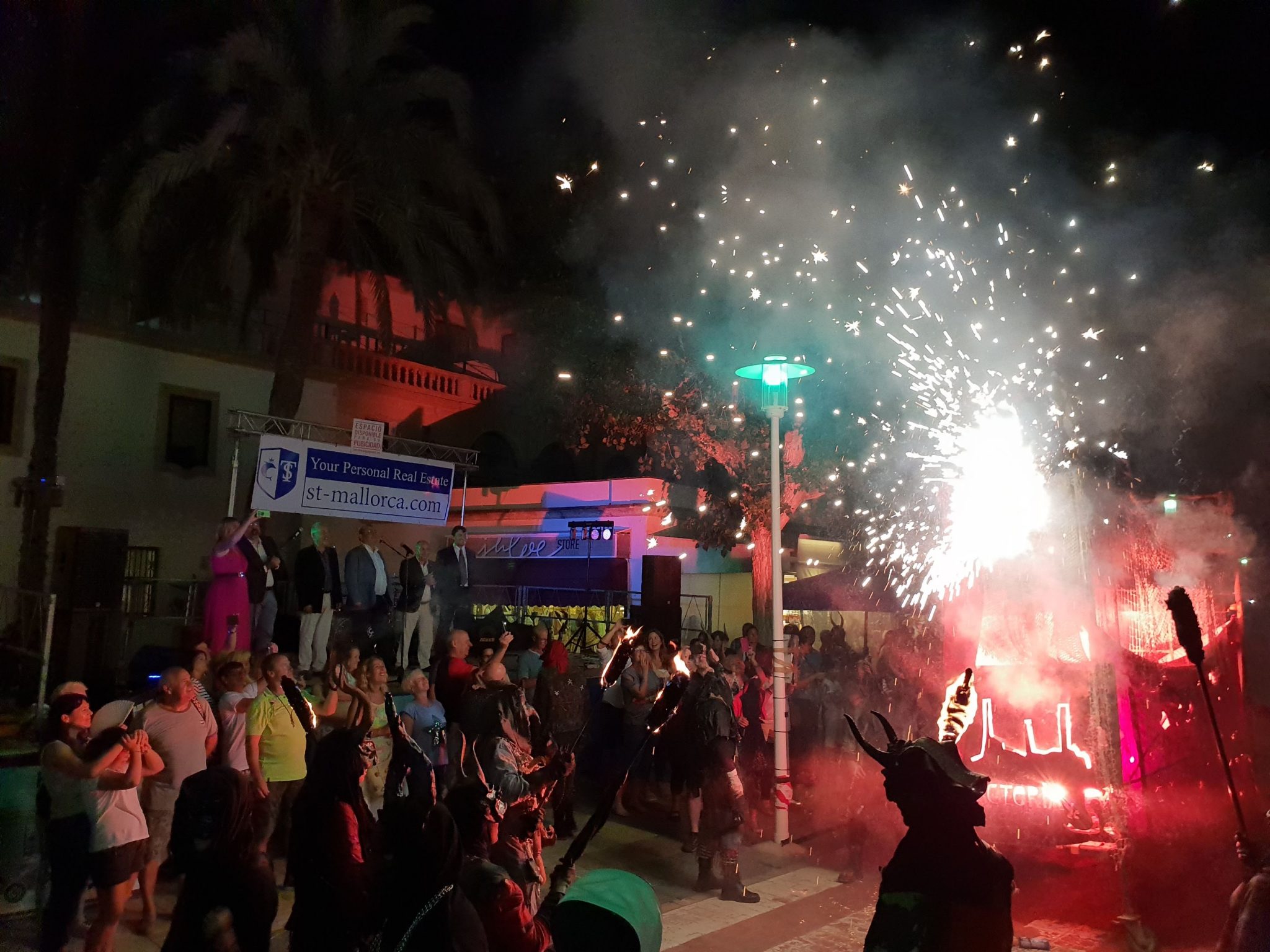 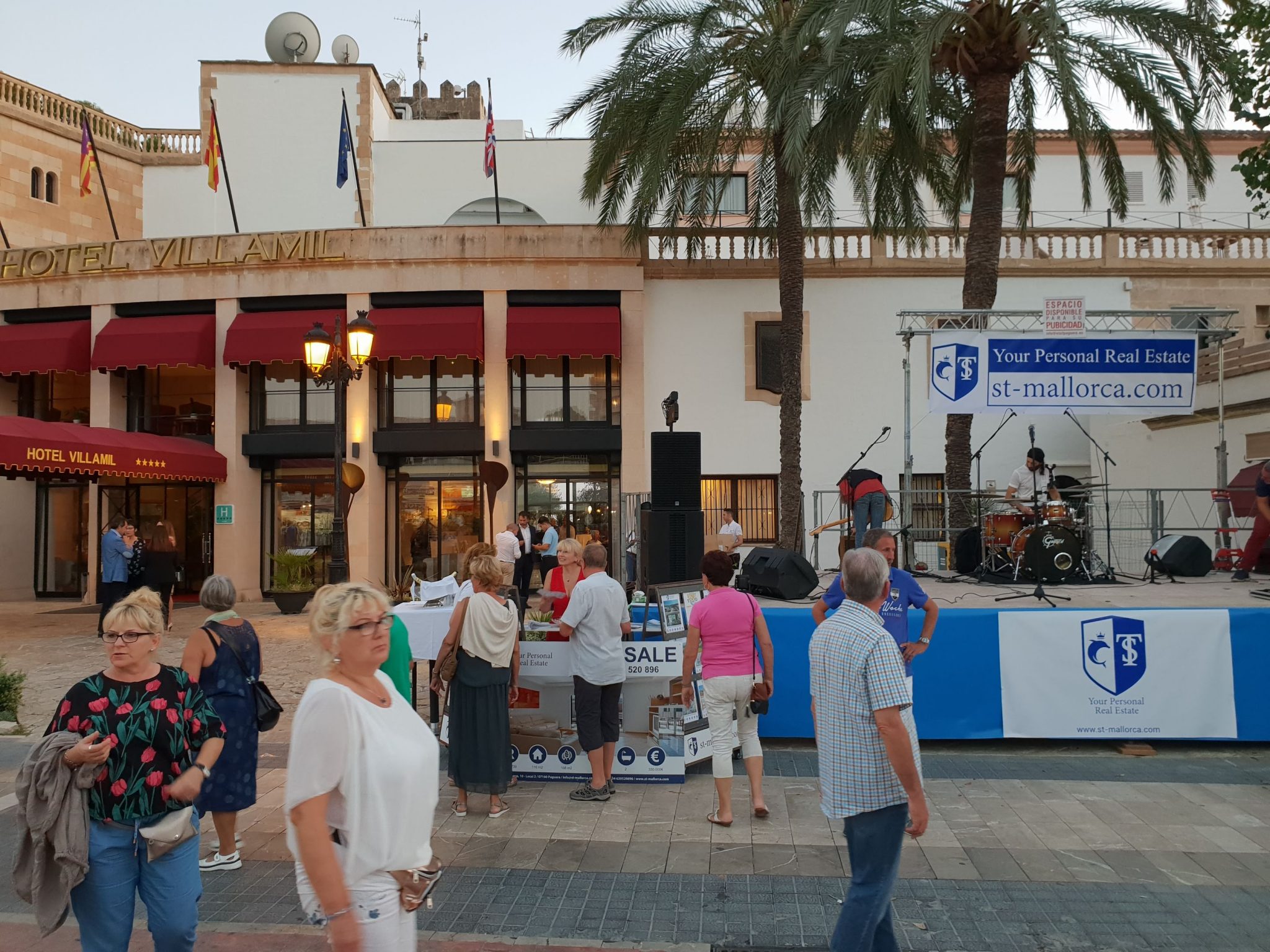 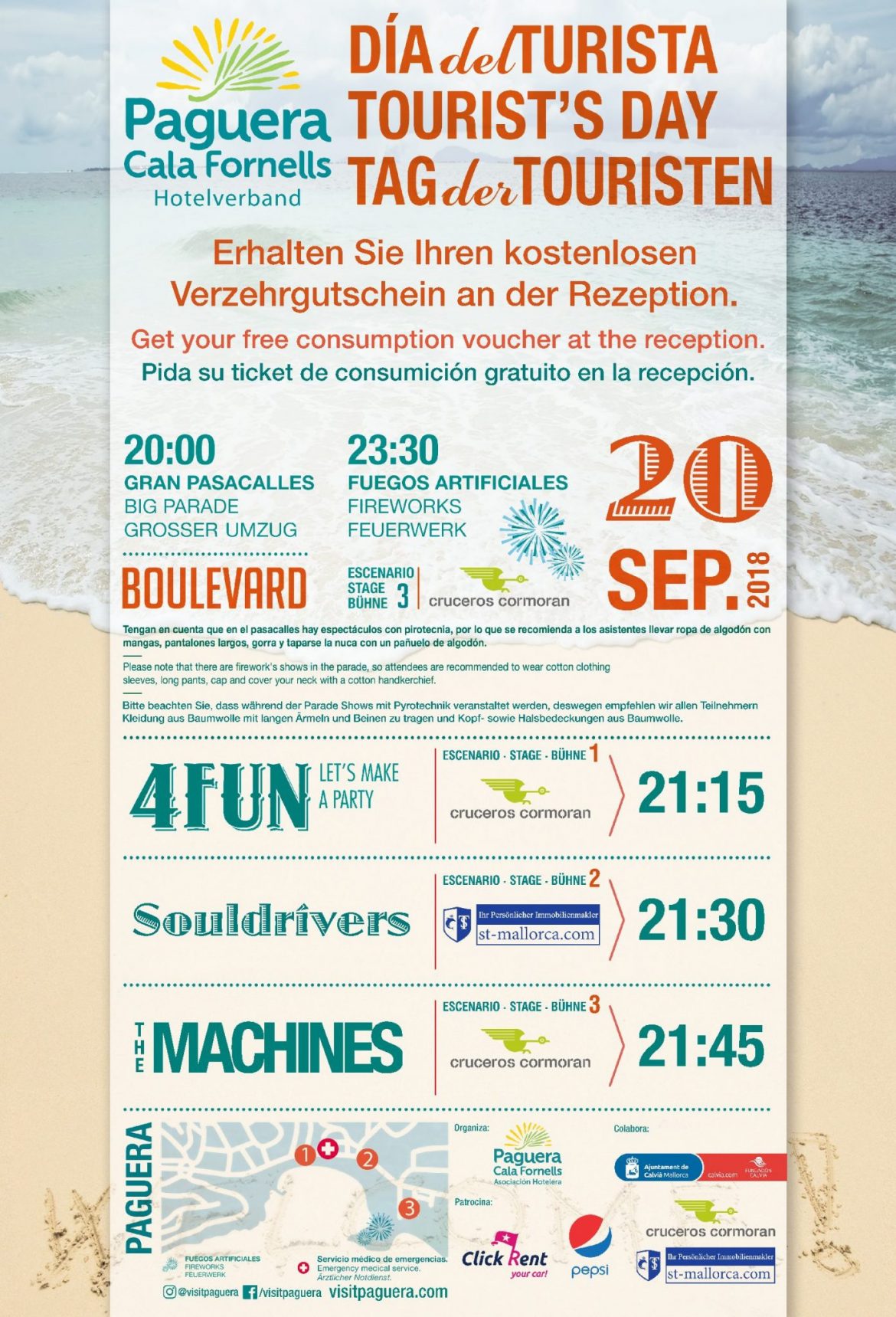 S&T Mallorca is official sponsor of the festivities “Día del Turista” in Paguera on the 20th / 21st / 22nd of September 2018. You will find us next to the stage 2 directly at the hotel “Villamil”. In addition  to various music concerts, children’s attractions, food trucks and fireworks, other surprises are waiting for you. Visit Paguera and our S&T Mallorca team. Asociación Hotelera Paguera Cala Fornells

Santa Ponsa is a tourist town in the municipality of Calviá, in Mallorca. It contains a beach half a kilometer long, another thirty meters long called “Caló de’n Pellicer”, a marina and different hotels, apartments, shops, bars, nightclubs and restaurants.

It has a renowned historical importance in Mallorca, due to the landing of the Aragonese King Jaime I of Aragon with the purpose of conquering the island in 1229.
The film Bay of Palma, (1962: Spiel und Leidenschaft) was filmed in its vicinity where the German actress Elke Sommer publicly exhibited a bikini for the first time. Scenes that at that time had to have police surveillance to be shot.

This authentic fishing village of San Telmo or Mallorquin “Sant Elm” is located at the extreme south-west point of Majorca and part of the municipality Andratx.

Two sandy beaches with a postcard view to the smaller island “Es Pantaleau” and also to the large, protected nature island “Sa Dragonera” invites to relax. One of the nicest attractions is to ferry to the island Sa Dragonera, and to conquer afoot the island.

In Sant Elm the sportive activities which reach from the walking, about paddles, canoe, surfing up to the diving are capitalised.

The boulevard offers great restaurants as well as a variety of boutiques.

Port Andratx an Andratx can be reached by car in a few minutes or by public transports.

S’Arracó is a small village in the municipality of Andratx. Since the availability of some mansions, like from Son Joan, at the beginning of the XVIII century, one began around the church Santo Cristo, established by Antoni Ferrandell Verí who is valid as a founder of the village, of forming of a city centre.

The biggest part of the houses is along the street of Andratx to Sant Elm, from the urban general view some houses stand out in the art nouveau which were built by French emigrants. Also, are worth mentioning the building of the old school and some bars. Topically, S’Arracó calculates an important number of the artists of the different nationality who have chosen this quiet valley as a residence place on a population of about thousand inhabitants, including.

S’Arracó is an excellent starting point to realise different travelling excursions, like that who starts 150 metres after the cemetery and rises up to the La Trapa.

Puerto Andratx is a natural harbour, in the municipality of Andratx which has lain in the southwest of Majorca, surround from bays with crystal clear water, like Cala Llamp, Cala Moragues, Cala Marmacen and Cala d’Egos. This antique fishing place has changed to a modern, cosmopolitan and kindly place in which the different cultures, business, the sun and leisure mix. He also offers countless activities which stand in connection with the sea. Anyhow, the “Club de Vela” counts to the Best equipped yacht harbours of Majorca.

The building “La Lonja”, report of the presence of the fishermen stands on the mole where one has the possibility to buy in the afternoon the fresh catch of the fishermen. Stores and restaurants with pleasant terraces along the promenade, invite to observe the sea and in the evening the sundown to observe.

In Puerto Andratx there are places of historical and architectural interest. On the one hand, the defensive towers, reports of the menace of the pirates, like that of Sant Carles, in La Mola; or in the street Rodríguez Acosta 9 who was converted into a private flat, and, on the other hand, the religious architecture like the church Nuestra Señora del Carmen.

Portals Nous is a tourist and residential town belonging to the municipality of Calviá, in Mallorca. It has a renowned marina, called Puerto Portals, hotels, shops, taverns, three beaches and apartments. In the town there is also the Marineland dolphinarium, where among other varieties, shows with dolphins and seals are made. It is characterized by being a quiet place, with a wide cove in which the island den Sales is located.
Until the year 1866 it was known as Els Terrers de S’Hostalet, a property that depended, formerly, on that of Bendinat. In that year the Oratory was inaugurated, on land donated by the Marquis of La Romana, with the transfer from the caves of Portals de la Virgen of the same name. In the upper part, in a plot of 22000m2 that reaches the sea, there is the Church that contains the image of the Virgin of Portals, which gives its name to the town. This parochial church is vulgarly known as the “Oratorio de Portals” or the “Hermita de Portals”.
Until the beginning of the Civil War, the middle class families of Palma built their second residences in the area.
Its marina is one of the meeting centers of elite tourism on the island, grouping royalty, jet set, artists and financiers.

Puerto Portals] is a marina located in Portals Nous, an urban center belonging to the municipality of Calviá. The port is at a distance of 9 kilometers from the center of Palma de Mallorca. Puerto Portals is recognized as a meeting point for businessmen, celebrities, high society figures and members of the Spanish royal family during their summer stays at the Marivent Palace.
In the area of ​​land, which occupies an area of ​​8.5 ha., The port has numbers of technical services for boats as well as several restaurants, boutiques, hotels, etc., Some of its restaurants, among which include, Flanigans, Tristán and Tahini are considered among the most exclusive in the Mediterranean

Camp de Mar a tourist zone has lain in the municipality of Andratx. In his coastal line there is the beach of camp de Mar who is about 180 metres long. The main attractions of the zone is a golf course which was initiated in 1999 together with the Hotel Dorint, and a small island with a restaurant which is to be reached about a wooden bridge from the beach.

The beginning of Camp de Mar is dated for 1932 when the Grand Hotel was built. The painter, patron and spy Thomas Harris (1908 – 1964) acquired a house there in 1949. Indeed, the real development of the place began only in the 80th when different residential areas originated. Camp de Mar remains a quiet zone in spite of the constructions.

Costa de la Calma is a residential area, which considers in the municipality of Calviá, Majorca, between Paguera and Santa Ponsa. It is quiet, and not a typical tourist region, enclosed by green zones and in the coastal zone there is the bay Cala Blanca, stamped by her rocks and different accesses to the sea. Famously the “Chiringuito” is (beach bar) as a excellent place to enjoy a Sundowner.

We use cookies on our website to give you the most relevant experience by remembering your preferences and repeat visits. By clicking “Accept”, you consent to the use of ALL the cookies. Read More
Cookie settingsACCEPT
Manage consent

This website uses cookies to improve your experience while you navigate through the website. Out of these, the cookies that are categorized as necessary are stored on your browser as they are essential for the working of basic functionalities of the website. We also use third-party cookies that help us analyze and understand how you use this website. These cookies will be stored in your browser only with your consent. You also have the option to opt-out of these cookies. But opting out of some of these cookies may affect your browsing experience.
Necessary Always Enabled

Any cookies that may not be particularly necessary for the website to function and is used specifically to collect user personal data via analytics, ads, other embedded contents are termed as non-necessary cookies. It is mandatory to procure user consent prior to running these cookies on your website.